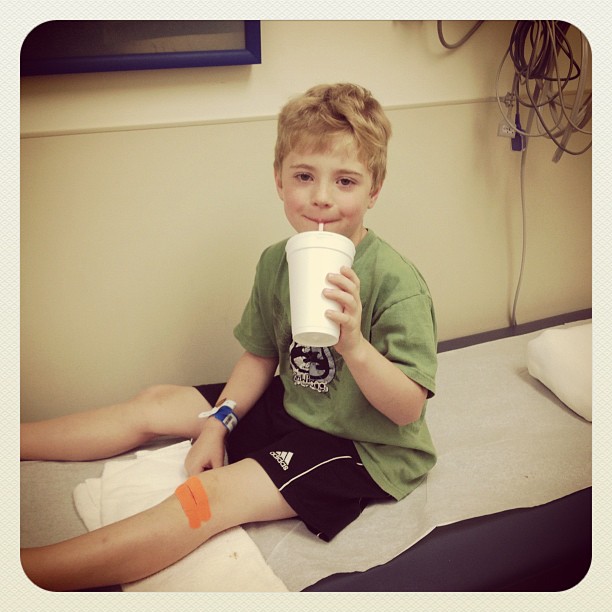 Screaming, Stitches and a Slushy

My youngest son, EB, is one of the happiest kids you’ll meet. I don’t know how much nurture had to do with it, but nature gifted him with this happy gene. He was born happy.

Last night EB had to get stitches in his knee after he fell off a bench at his brother’s soccer practice. We went to the children’s urgent care clinic. They put him in a child’s wheel chair. He jumped up with glee when he saw the wheel chair. I gave him that mom look and told him to at least act hurt. We went into a room and had a special nurse come to explain what they were going to do to EB. She had a Cabbage Patch doll with blue and red streaked hair (must have been from the city patch). This punked-out Cabbage Patch doll had a cast on one arm and stitches on the other. The doll has obviously been around the block. Anyway, the nurse showed EB what the stitches were going to look like and let him examine and touch similar instruments that were going to be used for his procedure. They were making stitches “fun.”

Next the doctor came in to begin the procedure after they numbed the wound. They laid EB back and gave him an ipad to play with. He would alternate between playing with the ipad and screaming. This went on for about 7 minutes. Three stitches later, it was over. They bandaged up his boo-boo with two neon orange band-aides and gave him a volcano slushy (orange and red mixed together).

I thought to myself…were we just at an amusement park? Everyone in uniforms wearing a smile. A ride where you get to drive your own vehicle chair. An interactive show with a doll. Screaming and crying as you ride the scary stitches-coaster, an arcade and a volcano slushy to top it off! Thanks nurses and doctors for the great time at your park…I mean clinic. I guess that is what children’s hospitals and clinics are all about, making it “fun” and easier on the kids…and the parents.