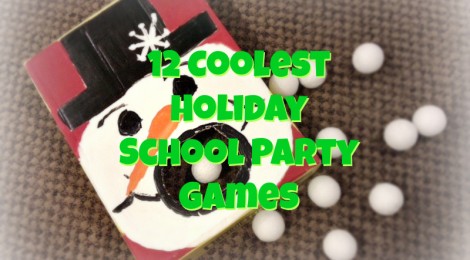 Is it me, or do your kid’s Holiday/Winter/Christmas school parties sneak up on you? To make your life a little easier, here are 12 of the Coolest Holiday School Party Games from preschool to 6th grade that you can organize in between your holiday shopping and decorating. Enjoy! 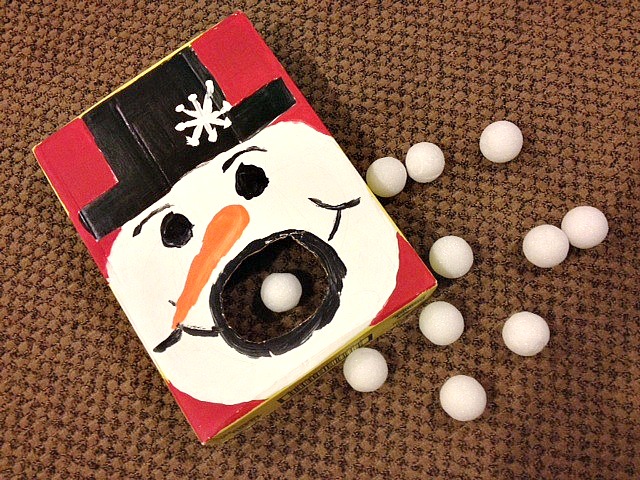 I made this snowman 9 years ago when my oldest was in kindergarten. It has withstood the test of time and the younger kids love this game.

Directions: Paint a snowman face on the back of your box. Cut out a hole for his mouth. Have the kids make a single file line behind a piece of tape about 5 feet from the snowman. The first child takes 3 turns throwing a “snowball” at the snowman’s mouth trying to feed him. That child will return to the end of the line when finished and the next child will go. Continue until everyone has had a turn. There are no real winners and losers in this game. To add some fun, when the kids are going back to the end of the line have them skip, twirl, crab-crawl or dance.

Directions: Divide kids into two teams and have each team form a single file line behind a designated starting line. At the other end of the room each team will have an identical pile of winter clothing, such as a hat, scarf, mittens, boots, coat, etc. The kids will have to race, one at a time, to the pile of clothing, put on each item, take it off again, and race back to tag the next one in line. The team who completes the relay first, wins.

Directions: Have children sit in a circle. One child is chosen to be the snowman. With eyes covered, that child can sit or stand in the center of the circle. Give a small carrot or a paper carrot to one child. Have the child hide the carrot behind their back. All other children also have their hands behind their backs.

Somebody took it from your home.

Upstairs, Downstairs, by the phone…

Wake up Snowman, Find your Nose.

The child in the center now uncovers their eyes and  guesses which child they think has the snowman’s nose. The ‘snowman’ gets up to three guesses. The child who is holding the snowman’s nose, now becomes the new snowman in the middle!

Directions: Set up your obstacle course and show the kids where they will go. The first person in line must have a scarf tied around both their legs so they waddle like a penguin. That child then takes a spoon of snow (spoon with a cotton ball) through an obstacle course around the room and cannot not drop the snow (or they have to start over). They must make it to the other side and add their snow to a bucket or boot. Once they are done, the next person gets their legs tied together and goes. This game can have teams or just everyone takes a turn.

Directions: Tie a piece of yarn or string across a 10-foot playing area (you could use 2 chairs to tie the sting to), about 1 foot above the floor. Divide the players into 2 teams of 4 and have them set up crab style (face up, leaning on their hands and feet) in their stocking feet on each side of the string. Use a coin toss to determine which team will serve first, then have 1 player on that team launch the balloon into the air for a teammate to kick over the string to their opponents. The teams kick the balloon back and forth, taking all the hits they need to send the balloon to the other side. If one team lets the balloon touch the floor, the other team earns 1 point and restarts the game by serving the balloon from their side. The first team to reach 15 points wins.

Directions: This game is similar to Hangman. Draw two identical snowmen on the board, each with 10-16 parts, like two or three circles for the body, arms, buttons, eyes, nose, mouth, etc. Divide the class into two teams. A player from each team spells a winter word, defines it, reads it, or answers a question about it; whatever you are working on is fine. If the player is correct, then he erases one part of the other team’s snowman. Play until one snowman has disappeared, or melted. If you start at the top, it would look more like melting, but that is not necessary.

Directions: Kids are divided up into 2 teams of 4 – 6 players works best. Set them up at the starting line and hand the first player of each team a Snowball (styrofoam ball) and a spoon.Inform them that the first person must place the snowball on the spoon and simply walk from the starting line down to the half way point (a chair, line, or a gift on the floor) and then must return to the starting line without dropping the snowball. Please stress that they cannot use their hand to keep the snowball on the spoon and if the snowball falls to the floor, they must return to the Starting Line and begin again.Once they successfully complete the task and are back at the Starting Line, they then pass the Snowball and the Spoon to the next player on the team to complete the task. Once all the players on a team have completed the Snowball and Spoon Relay they are the winners.

To Make Snowball and Spoon Game More Difficult: Have guests wear mittens while playing the game. Add obstacle to the course that they must maneuver around.

8. Draw Your Own Snowman

Directions: Everyone places a paper plate on their head. They each have a pen. The host then gives a series of instructions. Without looking, the players draw onto their plate, which is on top of their head.

Have everyone remove their pictures from their heads and vote who had the best drawing. It can be pretty funny to see what you have drawn.

Directions: Place goals on opposite ends of the room (playing area is a room or a section of a room). Divide the kids into two teams of 3 or 4. Create your snowballs (about 20). Scatter the Snowballs in the playing area. Each team must get as many snowballs to their goal before 1, 2 or 3 minutes is up. Only use feet to move the snowball, no hands. If hands are used then that player is out of the game. Once the time is up, the team with the most Snowballs in their goal wins.

Directions: Divide players into 2 teams. Cut the cardboard tubes into equal-length troughs, one for each player (ours were approximately 1 foot long). Have players line up 2 to 3 feet apart. Give each team a marble and have them race to pass it around the group 3 times. If a team drops their marble, they must start all over again.The first person in line sets the marble on one end of his trough, then, without touching the marble, rolls it the length of his tube and into the next player’s (it’s okay if troughs touch). That player passes the marble to the next, and so on. As each player passes the marble, he moves to the end of the line, eventually catching the marble again and passing it on. Whichever team ends first wins.

Directions: Print and cut-out squares of paper that have winter words on them. Place in a bowl or bag. Divide kids into two teams and have each team take turns sending up a player to draw for their team. Each player who comes up to draw selects a square of paper from the bag and attempts to draw what is on it without speaking any words. If their team guesses the word or phrase correctly within one minute, they earn a point. The team with the most points wins.

12. Holiday Minute to Win It Games

To check out The How-many-ornaments-can-you-balance-on-a-yardstick-and-papertowel tube-without-it-falling-over-in-a-minute game, The Nut-stacker game and other games, go {here} to the Mason Family Blog. 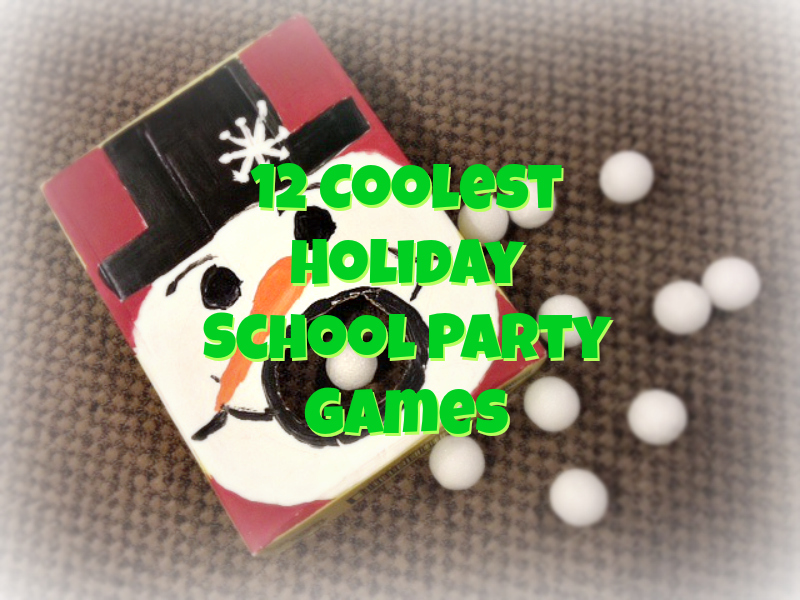