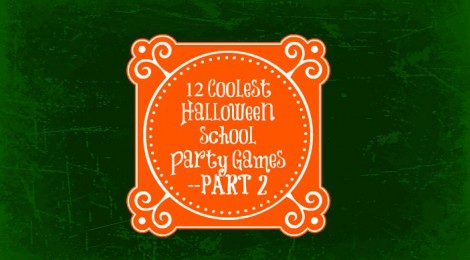 Calling all Room Parents, Teachers and anyone in charge of planning school Halloween parties! Here are 12 of the Coolest Halloween School Party Games-PART 2 that will keep everyone busy and having fun from Preschool to 6th Grade. Enjoy…Mwhaaahahaha!

2.Tape the pumpkins onto a wall, chalkboard or white board (child height).

3. Print off 1-2 copies of the Silly Faces Printable (below). Cut out and place pieces into a large bowl near the pumpkins with some glue sticks next to the bowl. 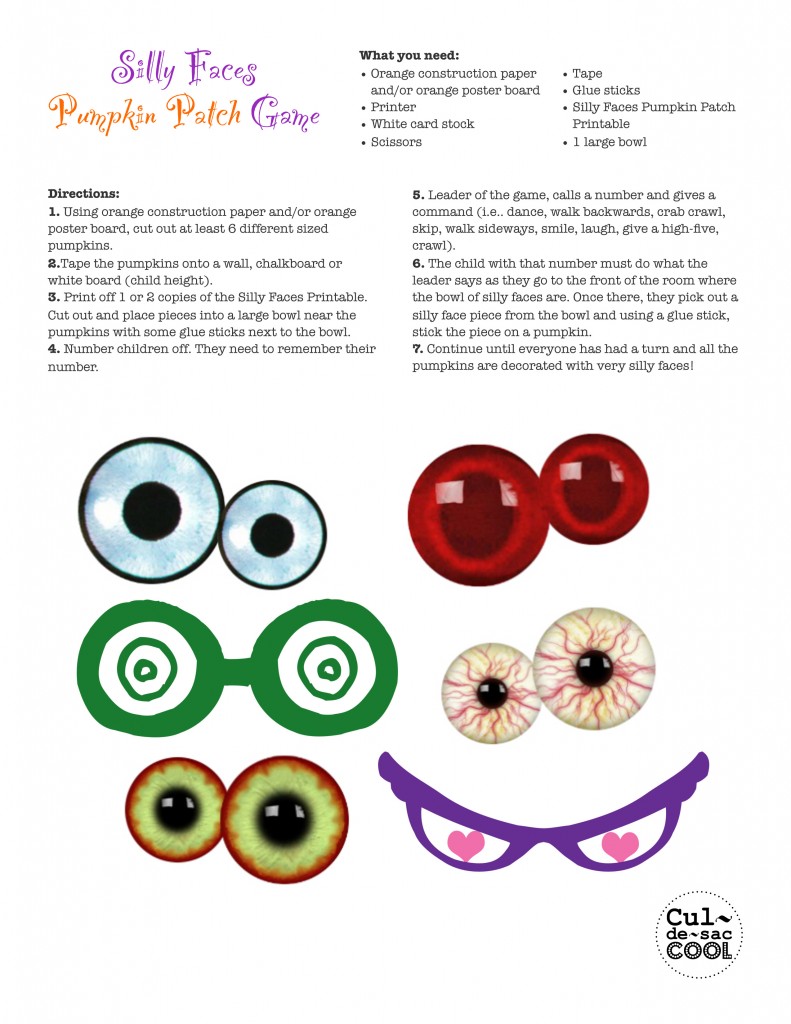 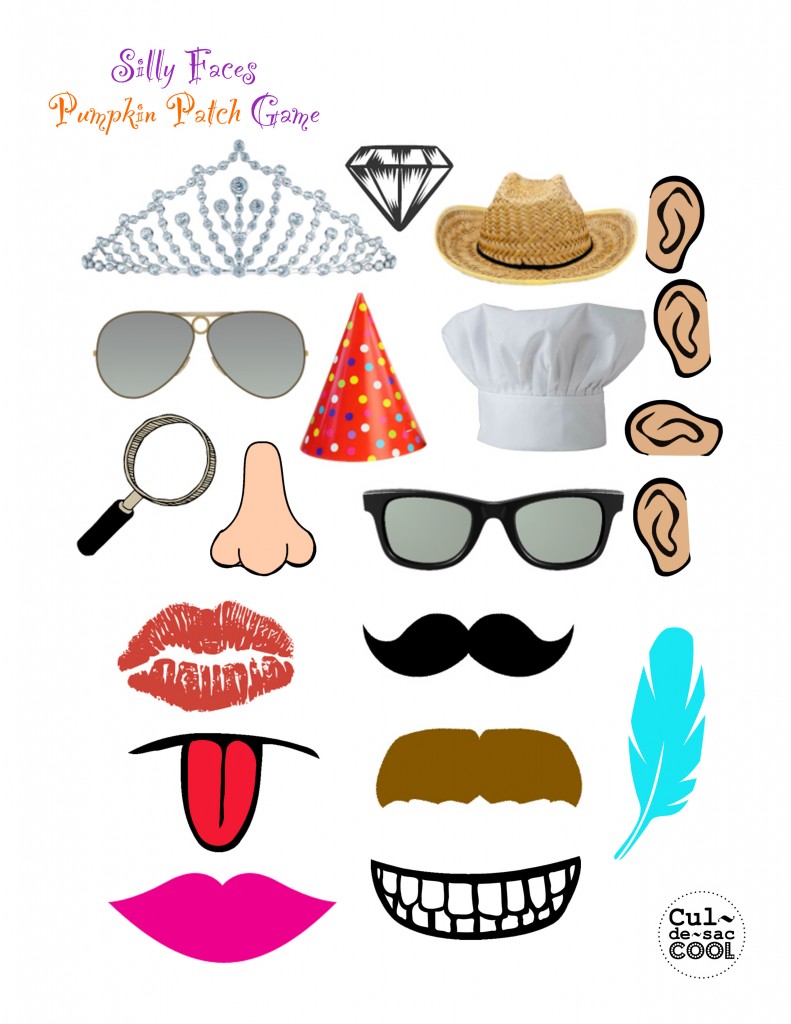 4. Number children off. They need to remember their number.

6. The child with that number must do what the leader says as they go to the front of the room where the bowl of silly faces are. Once there, they pick out a silly face piece from the bowl and using a glue stick, stick the piece on a pumpkin.

7. Continue until everyone has had a turn and all the pumpkins are decorated with very silly faces!

Have children sit on the floor in a circle. One player sits in the center of the circle, wearing the witch hat. She sings out, “I’m a little witch, looking for a seat. If I call your names, get up upon your feet.” The witch then calls out two of the children’s names. Those children must exchange their seats in the circle. If the witch gets to a seat first, the person left out becomes the witch and puts on the black hat, sits in the center of the circle, sings the song and the game continues. Originally from Yahoo! Voices {here].

Divide kids into two teams. On go, the first two player of each team take turns pushing the balloon,pumpkin or ball down the length of the room using the broom. You can set up obstacles for them to go around or under like chairs, desks, boxes. The kids return back to the starting line and pass off the broom to the next person. Whichever team finishes first wins. Originally from Ehow.com {here].

Everyone pairs off with a partner. One person in the team wraps the other person in their team with toilet paper for a certain amount of time… 2 or 3 minutes. Once wrapped, have the mummy run (or hobble) through an obstacle course (ie. around a chair, over some books, under a desk). Whoever makes it to the finish line first wins. Originally from About.com {here].

Fill a cauldron with several red and a few green apples. Blindfold players and have them reach in to pull out an apple. The green apples are the poisoned ones, and kids who pull out a poison apple are out of the game. Once everyone has pulled an apple, the players who weren’t poisoned take another turn. Replace the green apples as needed, and continue the game until only one player who hasn’t been poisoned remains. Originally from About.com {here].

Divide children into teams of 2. Players #1 stands facing forward and the start line. Player #2 stands beside him, facing backwards. The two players link elbows and on the signal, the pair run to the end of the room and back. One person runs backward each time. The rest of the teamed-up players repeat the same action until every person has a turn. Originally from KidActivities.net {here].

Divide the teens into teams. Using a string to tie plastic pumpkin around the waist of one player of every team. Mark a throw-line for the players. Position the pumpkin-wearing teammates at a distance of 10 feet from their team mates. Set a time limit of two minutes, within which the players have to target throwing the candy corn right into the pumpkins tied to their team’s member. After the game finishes, count the candy corns that have fallen into the pumpkins. The team that possesses the maximum number of candy corns wins the game. Originally from Lifestyle.iloveindia.com {here].

The Ghostly Waiter relay race is as fun to watch as it is to play. You only need a few simple materials to creative this fun Halloween Game. You will need two trays or cookie sheets and a handful of white balloons. You will also need to create a start line and another line as a turn around point for the race. Divide your party guests into two teams. The first person on each team will balance an inflated balloon on their tray. At the word “GO”, the two guests will make their way to the turn around point balancing their balloon on the tray. If the balloon drops, they have to go back and start over. When they make it back to their team successfully, they will pass the tray to the next player. The race continues in this way until all members of a team cross the finish line. Have some extra inflated balloons in case one drops and pops. Your guests will quickly learn that this is not a race of speed, but a combination of balance and grace. Originally from Squidoo.com {here].

One person stands in front of the crowd and tries not to giggle while the group takes turns asking them questions. The catch is that the person must answer every question by saying the word “Pumpkin.” It’s very difficult to keep a straight face. Some great questions are “What’s that between your eyes and lips?” or “What do you think your boyfriend’s head looks like?” What’s your favorite gift to find under a Christmas tree” “What’s that under your hat?” Get the idea? If the person laughs they loose their turn and someone else stands in front. You can use other halloween words too. Originally from Yahoo! Answers {here].

To make the eyeballs: Using the blue or green sharpie marker, make a round dot for the iris of the eye. Using the red marker, make veins radiating from the colored part of the eye on the white. When these dry, make the pupil of the eye with the black marker. For this fun activity, you place candy at the bottom of pumpkin containers and place them around the floor. Give the player 3 to 5 ping pong eyeballs and have them try to bounce the ball into a container. If they make it in the container, they get a piece of candy from that container. When you have the group of teens ready, send them off to hunt for pumpkins with a loud, “Go!” When a teen find a pumpkin, they get the prize that matches the number on the bottom. Originally from About.com {here].