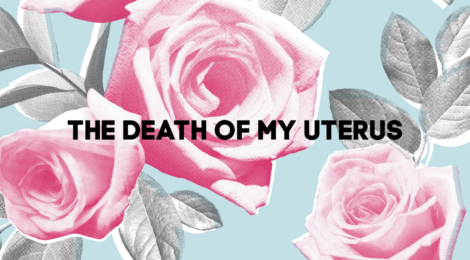 The Death of My Uterus

A woman dosen’t talk about her uterus much. When she does, it’s usually centered around the happiness of giving birth. As I’ve gotten older, I found out there is a darker side to some uteri (plural for uterus–I know, sounds alien). Some can’t hold a baby at all. Some cause constant pain and bleeding to their human. Some have endometriosis. Some grow fibroids. All of these conditions are normal, but they aren’t talked about much.

My uterus, let’s call her Bertha, gave me three amazing boys. She was a trooper. She was normal, strong and pretty regular. About seven years ago, Bertha went through a bad spell and needed to have an ablation to stop her from bleeding so much. This procedure did the trick and she was back to her normal “uterusness.”

Then, the beginning of January, Frank the Fibroid came to town. He set up shop inside Bertha, ignoring the “no vacancy” sign. He settled in and got lazy and fat. He even invited his small cousin to the party, Finn Fibroid, Jr., but Finn was quiet and no bother. Frank was the loud and obnoxious one causing all the drama and mischief. Bertha had it and decided her time inside me was up. She wanted a divorce from Frank (and Finn) and was ready to head over the uterus rainbow.

So off to surgery I went. I did not take this surgery lightly. I had to mourn the death of my uterus. She was a good girl. She did great things. She made me a woman and a mother, but, man, was she also a pain in the butt, literally. It was time. I was ready. Bertha was ready. Frank had no idea what was coming.

When my Mom found out I was having a hysterectomy, she started inviting people to the surgery. She meant well, she wanted me to feel supported, but I had to explain that this is not a celebration like a birth. No one comes running out revealing the gender of the uterus. This is the death of my uterus. It’s private and kind of sad…and sort of gross.

No one comes running out revealing the gender of the uterus. This is the death of my uterus. It’s private and kind of sad…and sort of gross.

I had my surgery, which was supposed to be laparoscopic, but Frank was pissed and didn’t want to leave his cushy home. The doctors had to take 2 extra hours extracting Frank through a small incision. Finally Frank was evicted and Bertha was pulled out. The real winners here are my ovaries. They got to stay and now they have so much room to redecorate. They are pumped.

When I woke up from recovery, I was telling my recovery nurse, George, all about taking Zumba and how he should come to my BARRE classes that I teach. I don’t remember talking to him or my doctor after the surgery, but I guess I did. I love my doctor. I think I could probably be her mother. She is young, but knowledgeable and has great bedside manners. The doctor that assisted in my surgery visited me the day after. He was a young, good looking doctor. The first thing he said to me was, “You had a very large uterus.” I wasn’t sure how to take that. I said, “Thank you, I think. So I’m hoping my uterus weighed like 20 pounds?” He replied dryly, “No, sorry.” Dang it!!

“So I’m hoping my uterus weighed like 20 pounds?” He replied dryly, “No, sorry.”

In all, the whole process has gone fairly smoothly. A little vomit never killed anyone or a swollen leg (no blood clot). I’m home now recovering after staying a night in the hospital. I have to take it easy for 4-6 weeks. That will be the most challenging part of this, but I can handle it.

Life goes on even without a uterus. Sure it was sad and recovery will be hard, but look at the stories I got out of the experience. I met some great nurses, techs and doctors. I got to spend time with my tribe. I got to say the word uterus over and over to make all the men in my life uncomfortable. I’ve even got the beginnings of a new children’s book (joking). Parts of this experience have been great, but don’t ask Frank. He is still pissed.

Note: No pain medication, other than ibuprofen, was used to write this post.

Tags: funny, hysterectomy, middle age, motherhood, mothering, mothers, Musings, parenthood, uterus, women, women's health
Disclosure: This post may contain my affiliate link, which means I will make a small commission if you click and make a purchase. Thank you for supporting CuldesacCool.com. All opinions are 100% my own as always. For more information, please see my disclosure policy {here}.